The company was bringing together 2,500+ team members representing eBay’s core business as well as the StubHub and PayPal business units. These employees would be occupying an expansive new campus consisting of two buildings, each with several floors.

Hatch recognized the limitations of his current configuration and knew that he wanted a fully interactive system that would notify all employees of important corporate-wide information, allow departments to manage their own specific messaging and encourage the entire eBay community to participate in company and community events.

The new Support Center consists of two separate buildings with multiple levels, connected by a breezeway. This facility boasts 120 monitors, each delivering five channels of digital signage and eight channels of satellite television.

“We knew right away we would use a modulated system,” says Fitzpatrick. “There’s no other realistic way to deploy independent signage players and set top boxes to hundreds of monitors over these distances.”

By installing an RG6 coaxial backbone and choosing five ZvBoxes to drive signage plus four HDbridge 2620’s for the satellite content, RevelTV gave eBay a simple, reliable and cost-effective way to see all of their content on each and every TV. Changing the visible content is as easy as changing the TV channel, and adding channels in the future will be a breeze.

One peculiarity about this installation is that there are actually two headends: signage players are housed in the Marketplace building while the satellite receivers are located in the Community building.  To bridge the headends together, Fitzpatrick ran an RG11 trunk line. 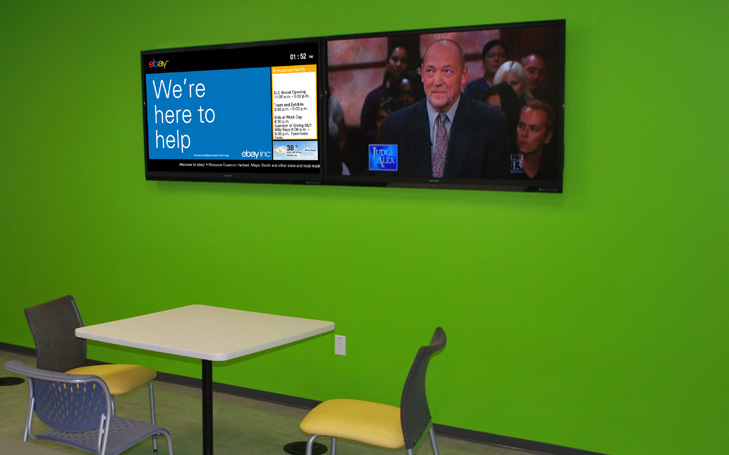 “It’s funny that in our high tech world, broadcast technology developed 40 years ago is still one of the easiest, most reliable, and cost-effective solutions,” he says. “The only other system we could have done would have required fiber. For a corporate application with this many monitors, the quality of picture with QAM and ZeeVee is more than acceptable. This installation proves that it still makes sense to pull coax, even in new facilities.”

The new communications system does a great job of keeping the entire community up to speed on what’s happening within their department, company and local community.

Commonly seen messaging includes Human Resources information (open enrollment and employee spotlights, for example), volunteer opportunities, fundraising initiatives, community events and general postings about local transportation schedules. When the campus was first opened, desktop support and IT posted their contact information and updates to help get everyone settled in.

The five signage channels are designated as either corporate-wide or department-specific. Each group manages their own channel, with the exception of corporate communications, which can broadcast content universally. This new structure offers two main advantages.

First, eBay frequently moves people around throughout the facility. When changing from one area to another, team members simply have to change a channel on the nearest TV to get their own content locally.”

Second, by utilizing RevelTV’s full-service Channel Valet initiative, local eBay users can tap into a dedicated team of graphic designers and technical members who make sure that all screens are continuously running with the latest & greatest content. “We exist because the department manager, secretary or even Communications Director wants effective messaging, but doesn’t want to deal with the complexity of content generation and management,” explains Fitzpatrick. “None of the eBay employees have to be technical or graphic design people; they just need to be able to tell us what they want done.”

In this model, many people from different departments can feed content to the screens with the help of RevelTV’s Channel Valet team, which ensures accuracy, optimized messaging and consistent branding. Brad Hatch’s vision has become reality: signage on this campus has become a much more interactive, community-based experience.

“We are often approached by other vendors, and we do evaluate their products,” says Fitzpatrick. “The reason we keep choosing ZeeVee is simple: the ease of set up and quality of product makes the determination for us. Also, I’ve gotta mention that we rarely need tech support, but when we do reach out the ZeeVee team is right on top of it. My advice? Try ZeeVee. I guarantee you won’t be disappointed.”